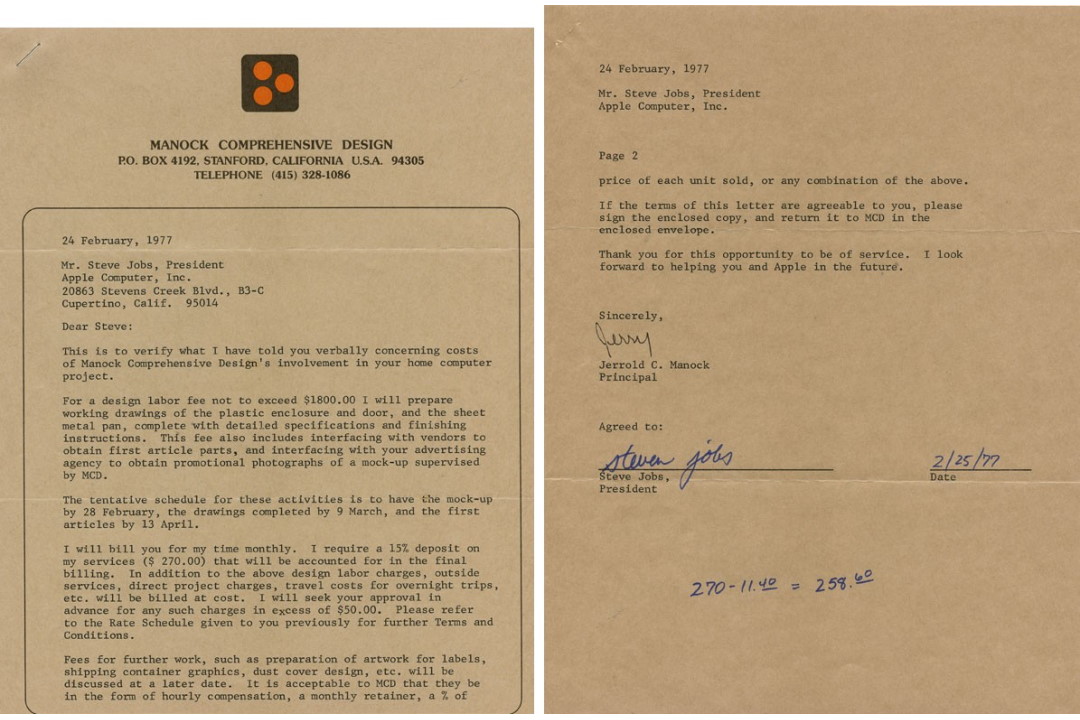 Jerry Manock was a consultant hired by Steve Jobs to create the design for the Apple II. Seven Days caught up with Apple employee #246 for an interview:

Walking back from lunch one day, I said, Steve, you paid me $1800 for the Apple II, and it’s getting to be more and more popular, and I really think I ought to have a royalty on that. I ought to get, like, a dollar a unit, because $1800 wasn’t all that much. He never hesitated. He looked at me and said, “You’re very good. But if you knew how many we thought we were going to sell in the next two or three years … You’re not that good.” What do you say to that? He was absolutely right. How many millions of those things did they sell? You can’t ask for royalties after you’ve delivered the work, so it was totally stupid and naïve on my part. And he was a really incredible negotiator.

I had just stopped working for a big company. I wanted to be on my own, set my own schedule. Then, like, 75 percent of my billing was to Apple. So I said, “Look, this is crazy. I’ll join you, but I only want to work half time. Twenty hours a week. Well, I wound up working, like, 50 hours a week, for half pay. I did that for about six months. I thought, This is totally stupid. When I signed the papers as a full-time employee, I was No. 246. I always tell people I could have been No. 6, which was worth, like, $85 million when they went public. But instead, I wanted my $20-an-hour consulting fee.

We still have Apple stock, but it’s not the original. The basis of that stock went from 3 cents a share to $65 a share when it went public. You can imagine some of those tech guys in the lab, with just a high school education, were given maybe a thousand shares of stock when they joined. These kids were all of a sudden worth millions of dollars. The IRS said, if you exercise the option, it’s just like earned income. You have to pay taxes on it. All of a sudden these guys were getting tax bills from the IRS for, like, $185,000. They didn’t know what to do … I wrote to the IRS and said, “I’ll try to pay you quarterly.” They wrote back and said, “Pay it all now or go to jail.” This was serious stuff. But we were lucky.

Jobs wasn’t in favor of focus groups, which were very popular at that time. He’d say: They’re going to base their knowledge on what exists now. I know what is going to exist five years from now, and they’re not going to understand that.

His genius was in synthesizing different technologies and putting them together to solve a problem that you didn’t know you had — a couple of years out. Apparently, before he died, he laid out four to five years of product-succession plans.

When somebody asked him what kind of market share he wanted, Steve was famous for saying, “I want it all. I want 100 percent.”

In this article:Innovation, Steve Jobs